I first used ICSD in around 1997. Until then, we could only search for materials in paper media such as JCPDS cards, Chemical Abstracts (CA) and chemical-related papers, so we had to run around the laboratories and libraries throughout the university. And I didn't like the peculiar smell of the old paper. ICSD made the search easy on a personal computer, so it became overwhelmingly comfortable.

However, it was also the beginning of suffering. It's the same for everyone because experimenters who know more about physics than me and even theorists can easily access (the database of) materials. The search for materials and documents in the past seemed to be an exploration, but now I don't think that way anymore. I should say that my favorite place has become more like tourist destination. I've been (really) worried for three or four years that I could not survive as a researcher if I continue the attitude to find new physical properties from existing materials.

Then I discovered the "Development of new materials using low-temperature synthesis method". This method aims at using existing materials as "precursors" and converting them to new materials while maintaining the basic skeletons of their structures unchanged. We have succeeded in creating an infinite-layer structure SrFeO2 by performing low-temperature reduction reaction between the perovskite structure SrFeO3 and a metal hydride and removing two apical oxygens of the FeO6-octahedron as shown in the Figure 1 (Nature 450, 1062 (2007)). SrFeO2 has very rare local state (planar tetragonal coordination) for iron. Next, we have also succeeded in synthesizing a new material Sr3Fe2O5 with a spin ladder structure from the existing two-dimensional structure Sr3Fe2O7. 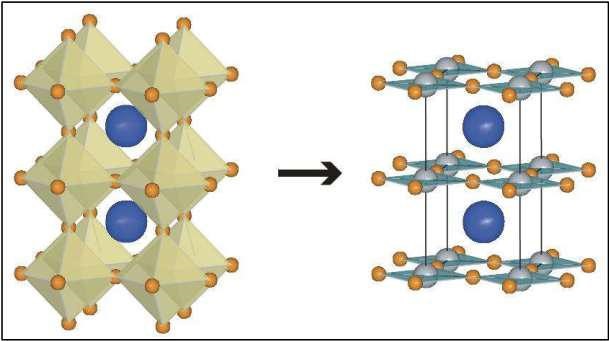