Structure types were introduced in ICSD in 2007 as an approach to describe structural similarity between inorganic structures. ICSD structure types can best be classified as isoconfigurational, according to the definition by the IUCr. In this definition isoconfigurational structures must conform to certain structural parameters (descriptors) like space group, Pearson symbol, Wyckoff sequence, c/a ratio, ANX formula. Of these descriptors the Wyckoff sequence is crucial, because it describes the atomic arrangement in the unit cell. Inorganic structures are often visualized by coordination polyhedra of single atoms or ions. Each structure type is characterized by some or all of the descriptors as has been explained in detail by Allmann and Hinek.

For each structure type a “prototype” is selected from all structures belonging to this structure type. The prototype and thus the name of the structure type is mostly based on the first publication of this structure. The prototypes play an important role in ICSD as the atomic environment (AE) of suitable non-H-atoms in this structure is listed as an additional comment. The AE represents the first coordination sphere and includes all first neighbors forming the coordination polyhedron. For example, in the spinel structure Al2MgO4 the oxygen atoms are arranged in a cubic close packed lattice while the Al and Mg occupy every second octahedral void and every eighth tetrahedral void, respectively. The comment for this entry in ICSD (collection code 31373) includes the AE:

In this systematic description, the atomic environment for Al, Mg and O is specified. The aluminum is octahedrally (6o) coordinated by six oxygen ions (O6); the magnesium shows a tetrahedral (4t) coordination by four oxygen ions (O4) and the oxygen is also tetrahedrally (4t) coordinated by three aluminum ions and one magnesium ion (Al3 Mg). The text in italics describes the second coordination sphere around the oxygen, but usually only the first sphere is given in the prototype entries.

The following letters are used to distinguish between the coordination polyhedra: 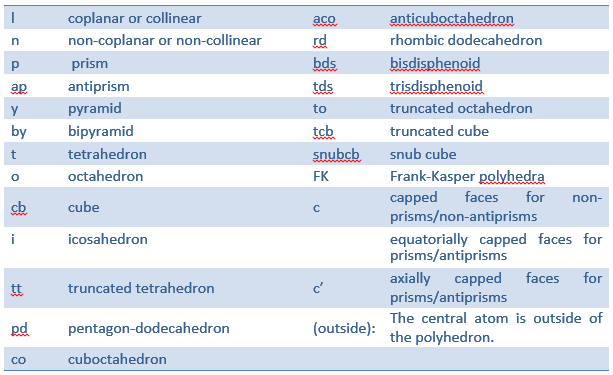 The following list shows for each coordination number the symbols observed in ICSD: 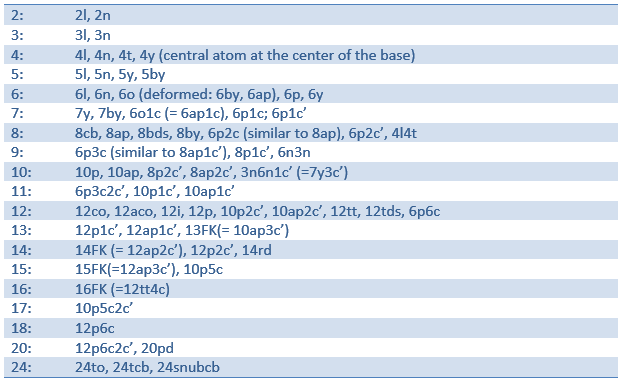 The coordination numbers in ionic structures usually do not exceed 12. Very frequent coordination polyhedra are 4t (tetrahedron) and 6o (octahedron). Cations are surrounded by anions and vice versa. The anion-anion contacts are neglected despite the fact that they play an important role in space filling and the unit cell dimension.

In spinels, for example, each oxygen has 12 O-O contacts as second neighbors resulting in the coordination polyhedron “12co”. Assuming an O-O distance of 2.8 Å this corresponds to a cubic lattice constant of about 7.92 Å (=2.8*sqrt(2)*2), which is in good agreement with the cell parameter a=8.08 Å for the ICSD entry with collection code 31373.

In structures of metals frequent coordination numbers are 12 to 16 (12i-16FK) due to the closer packing in comparison to ionic structures. A metal structure consists of cations embedded in an electron gas. The existence of energy bands of the electronic states in metal structures is the reason for characteristic properties like thermal and electrical conductivity. The variety of ion-radii of atoms in metallic structures is smaller than for ionic ones and the anions are generally greater than the cations.

Usually the first and second coordination spheres of a given atom are well separated by a significant “distance gap”.

In ICSD, the coordination polyhedra are specified in the comments and are only given for the structure type prototypes.

A coordination found in a prototype will also appear in all members belonging to this structure type.

Here are some examples of how to search for coordination polyhedra:

In ICSD Web or ICSD-Desktop this search field is accessible in the Advanced Search on the Experimental Information mask (Fig. 6). No automatic truncation takes place. This means that the given terms are searched exactly, if no wildcards have been explicitly set by the user.

This is a shortened version of the article in our brochure A Focus on Crystallography. The original article is much more comprehensive.